The Island of La Gomera belongs to the Canary Islands, being the second smallest in area with 369 km2, forming practically a circular surface. It is located inside the insular territory, next to the island of Tenerife of which it is separated 28 km from the closest point. Geologically speaking it is the oldest island of the archipelago, of which its last volcanic eruption took place two million years ago. This fact has granted the island with a series of characteristics, mainly by the erosion that has formed spectacular ravines, impressive volcanic necks exposed to the surface and marine cliffs of singular beauty. In the centre raises the Heights of Garajonay, the highest point of the island with 1.487 m, that owes its name to the National Park of which it is surrounded, providing the island with an exuberant green carpet that occupies 11 % of the insular territory. The climate of the island offers us two different atmospheres, north and south. The northern region of the island, where the municipalities of Hermigua, Agulo andVallehermoso are situated, is the most historical and formerly highest populated. VThe area offers a stable climate, composed by soft temperatures and a middle degree of humidity, produced by the effect of the Trade winds. This effect provides soft dew to the existent vegetation formed most of all by the National park of Garajonay, located in the highest areas of the three municipalities. Clearly differentiating the south of the island, the leeward offers temperatures a bit higher, less humidity, and scarce vegetation. The population of this region is mainly formed by the municipalities of San Sebastián, Alajero and Valle Gran Rey, where the last two are the most concentrated touristic areas of the island.      Traditionally, the economy of La Gomera is based on the agriculture where most of the cultivation areas are situated in the mediocrities, valleys and ravines, in such a way that it takes advantage of water and humidity. Due to the topography of the insular territory, the inhabitants, already since the time of the colonization, work the land in a stair-like way, building impressive stone walls on the hillsides to form flat areas to cultivate. The cultivations have been varied from the XVI century when sugarcane was exported, followed by tomatoes, substituted later by the banana which is still the main export product. The island also has other smaller cultivations dedicated basically to self consumption, like corn and potatoes. At the moment the island has also a strong wine tradition and there are several harvesters that bottle and commercialize their own products. The Insular Cooperative, located in Vallehermoso, is the one that bottles the largest numbers of wine.

The palm honey, a transformed ancestral product, elaborated since many generations until the present, is made with the juice of the palm, vegetable of which the Gomero town takes practically entire advantage of. The extracted liquid is transformed to very sweet consistent syrup, similar to candy syrup, and its use is basic in the elaboration of the traditional confectionery. Little we know about the history of this small island previous to the arrival of Juan de Bethencourt, who below the Castilian control starts the conquest of the island at the beginning of the XV century. Due to the unjust treatment that the aboriginals receive, their behaviour towards the visitors changes and what at the beginning of middle of the century is a pacific coexistence, is transformed to several bloody rebellions. La Gomera has a decisive and important role in the discovery of America, as the admiral Christopher Colombo leaves September 6th 1492 from this island toward the new world, loaded with provisions and water.

The language of Whistling, of pre-Hispanic origin, is a form of communication that is born in the gomero town as a need to overlap valleys, ravines and high mountains in order to communicate among the different towns without making big displacements. It consists of spelling the syllables whistling with the help of the fingers introduced in the mouth. Today, there are very few people that have maintained this tradition, although at the moment at school it is another subject. The popular architecture doesn’t vary that much compared with the rest of the islands; it offers two types of houses differentiated by its location, construction elements and purpose. In the urban areas the houses have two floors and an entrance formed by a patio or a vestibule. The structure is distributed around an interior patio surrounded by different rooms and at the back of the house; they usually have a small orchard for small cultivations. The houses located in the rural areas form part of agricultural exploitations, they are located near the accesses, and the elements used for their construction are based on the use of natural materials as tiles of mud, stones, pine and firebrand wood. Currently the population’s immigration and the abandonment of cultivations has generated a loss of functionality of these houses, that after losing their activity, since a few years have begun to take importance due to the appearance of new uses: the creation of a touristic alternative named Rural Tourism and foreigners which use the houses as second residence. The history and culture of La Gomera shows ancestral aspects, sample of a town full of tradition. Folklore is one of these aspects as its origin goes back to the XV – XVI centuries, it is based on singing romances formed by epic poems of narrative type accompanied by the drum and a wooden native instrument, similar to a big castanet which is called “Chacaras”. At the same time the song is accompanied by a dance formed by two lines of dancers facing each other that go forming couples advancing and going back supporting on the tip or the heel of one foot or another depending on the sense of the dance.

The craft is another aspect of the island that has not suffered changes at all in its elaboration from the times of the aboriginals. Ceramic elaborated without lathe is highlighted for its functionality and diversity, mostly made with mud, sand and other materials found mainly in the areas of mediocrities. They form beautiful vases, milk pots and braziers. To take advantage of cloths in disuse, “traperas” (rags), some kind of carpet that can also be transformed in quilts, blankets, saddlebags or bags, according to the density of the cloth, are made by using complex wooden looms, which are elaborated with the help ribbons and thread. Moral, chestnuts and walnuts are used mostly as material for wood work, although other species belonging to the Laurisilva, such as “viñatigo” and “brezo” are employed. The instruments made with this material are used as kitchen tools, such as the mortera (instrument to make typical sauces), although they also elaborate instruments like the chacaras and drums. The Palm, the rush, wicker, the banana tree and the cane are other vegetable bases used to elaborate, baskets, hats, etc. Sharing similar characteristics with the rest of the islands, the kitchen of La Gomera shows peculiarities in its plates such as the yam pottage, fish boiled in “mojo” (typical sauce), the “almogorte” and the caviar of La Gomera. Without leaving their pastry specialties behind among those where the curd cakes, buns of milk, “gofio” balls with palm honey, almond and butter cookies. 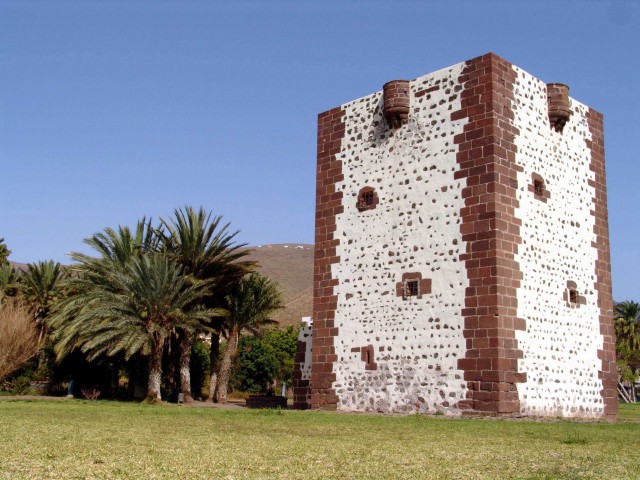 There are two ways to get to La Gomera, ship or airplane. If we come from the main land or from abroad and we want to come by ship, the best election is to choose a flight that leaves us at the airport of "Reina Sofía", in the south of Tenerife. A taxi drive of approximate 15 min, would leave us at the ferry terminal at the harbour of Los Cristianos, departure place for the ferries to La Gomera. At this point you can choose between different ship companies: a ferry with

Naviera Armas . This ship have their destination in "San Sebastián de La Gomera", capital of the island, from where we can move to the rest of the island by car or bus. If you will carry out your stay in the north area of the island, Hermigua, Agulo or Vallehermoso, you will have to take the main road GM1. If on the contrary, you go to the south or adjacent areas, you will have to take the GM3. The second option, if we want to come by airplane, is to choose an international, national or insular flight that takes us to the Airport "Los Rodeos", in the north of Tenerife. From this airport we can take flights that communicate with the airport of La Gomera, located in the municipality of Alajero, from where we will move to other parts of the island.
Powered by tecnicalia.es